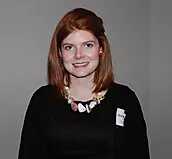 New York Times White House Correspondent Jeff Zeleny spoke to the audience, which included the Keating finalists as well as several scholarship winners. He encouraged students that while journalism is changing the essence of it remains the same — talented reporters are still needed to go out to find and write good stories.